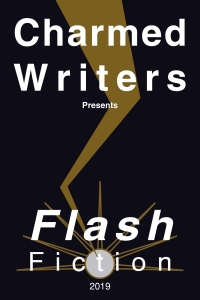 Marcia lost her father when Pearl Harbor was bombed. She 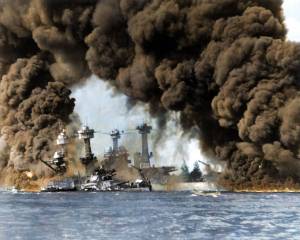 promised herself she would avenge his death, at any cost.

She heard the booms before she crested the hill and witnessed hell in paradise – the harbor was burning. The great battleships were aflame; holes ripped in their sides, like gaping wounds of giant sea beasts after a long, bloody battle. Black columns of smoke pierced the sky. Sailors scrambled around the docks, like frenzied ants whose hill has been kicked. Distant cries of anguish and anger swirled together and washed up the hill.
Her hope receded as the certainty of Jack’s death seeped into her heart. Her knees buckled and she collapsed in a sobbing heap.

‘Waves’ by JM Ames, part of the anthology Charmed Writers Presents Flash Fiction 2019 is now available worldwide as an ebook.

“Loved “Waves” from Flash Fiction. We “saw” the whole story in just a few paragraphs. My favorite phrase was “ hell in Paradise”. Great job”